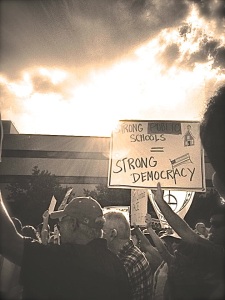 I sent this in to be published last night:

We The People Deserve Fair Elections

Are you okay with the fact that North Carolina politicians receive huge donations from wealthy contributors and give tax breaks to the rich and corporations while they cut funding for schools, public safety and for other critical, life-saving services?  If you want a government that cares about and listens to ordinary North Carolinians, then I have good news. There is a coalition of organizations in our state right now working to take back our democracy advocating average citizens speaking out against these injustices who want to get this private money out of OUR election system.  “We the people” are being railroaded by wealthy campaign donors like Art Pope (billionaire CEO of Roses, Maxway and other chain discount stores) whose political money is silencing the overwhelming majority of North Carolinian voices, all the while implementing new laws restricting our right to vote!

Until this year, North Carolina had a public financing option for our Supreme Court races.  Currently, in state legislative races Connecticut, Maine, and Arizona, and city races in New York City, among others, the citizens have fair representation because candidates are not ruled by big dollars but by the needs of the people.   Imagine politicians spending time talking with you and solving problems, instead of using precious hours each day raising money from wealthy contributors. It means that highly paid corporate lobbyists lose their clout! It means that if you have good ideas, you can run for office even without millions in your bank account!

However, by the end of our latest legislative session, Art Pope used his new position as the Budget Director for Governor Pat McCrory, along with a very small group of ideologically driven politicians, to completely gut our Judicial Fair Elections program.  DESPITE the fact that over 93 percent of North Carolina voters believe that campaign contributions can affect a judges ruling (according to a 2011 poll from the nonpartisan N.C. Center for Voter Education.)  This complete and utter disregard of our voices is leaving us in the dark.  We need accountable and representative government., not one beholden to the money that pays candidates’ campaigns.  This is a non-partisan issue.  Money floods our election system and drowns out ALL of our voices.  But there is something that YOU can do and something that North Carolina is doing right now, to make this legislature and governor accountable to their electorate.  Thousands of people across this state have been protesting at Moral Monday rallies, standing up for their rights, and making it known that we will not re-elect those who are tearing apart our foundation of Democracy.

Alamance County is hosting a Moral Monday event, Monday October the 28th, from 5-6:30pm at the Burlington Historic Depot Amphitheater.  We will be rallying to show both our complete disapproval of the actions of our legislature and governor and also rejoicing the efforts of ordinary citizens to stand up and be heard.  We are inviting you to join us in our mission to bring to light the harsh injustices that have been hidden beneath the surface here in North Carolina.  Uncovering the truth that corruption and money are silencing people like us and keeping us from the Democracy that we fight for and deserve.  We should be able to run for office with the support of our communities, not because of how much money we can raise to outspend our competition.  If ordinary citizens had the resources to run for office independent of special interest money,  it could lead to the break we need from the powerful hold that money has on our democracy.

The truth is that with YOUR help, a more accountable North Carolina government could be within our grasp,  even though powerful corporate donors are fighting to retain their grip on our political process. That’s why we need you! Minorities, veterans, the elderly, women, the disabled, unemployed, students, and all working people across the state have an important role in deciding whether North Carolina will have a political system where everyone’s voice is heard. If you want your representatives in Raleigh to listen to YOU, join our Moral Monday rally in Burlington, October 28th to show your support for a fair and inclusive democracy. North Carolinians deserve a state government that is of, by and for the people of North Carolina  —   not one bought and paid for with big campaign checks. Together we can do it! Forward together, not one step back!

Tiny Desk Submission: For Us To Seek Her